Have I mentioned how much I love living in Nashville? Because I do. Love it, that is. Even though I’m a northerner by birth, ever since we moved here 8 years ago, it’s been home. We tried moving back up north a few years ago, and we made it a couple years up there, but something had changed in us. We weren’t New Englanders anymore. We were Nashvillians.

And then — and then — I learned how many awesome authors live here. I had no idea my city was so rife with talent! It’s amazing and wonderful and I love it.

Last night was no exception. I went to a debut author event at our library for C.J. Redwine, Kat Zhang and Sharon Cameron.

I’ve only read Defiance (LOVED it) and half of What’s Left of Me (greatly enjoying it), but I’ve read some great reviews of The Dark Unwinding as well, plus I’d talked with Sharon briefly and already determined she was awesome, so I was really looking forward to this event.

I showed up 15 minutes late because rush hour traffic is the devil, but it was okay. It was a small gathering (probably because it was a Thursday night and rush hour traffic is the devil) and they were just sitting in a circle chatting about their books. And they all recognized me, and I felt like I was one of the Elite, but really all that means is that they all have decent memories because I’ve seen all 3 ladies within the past month. 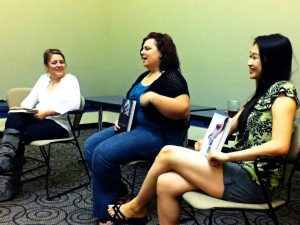 They each gave a brief summary of their books, then opened it up to questions. Here’s the highlights.

On the covers of their books:

On when they write and what their lives look like:

On whether they always wanted to write:

On the creative process for writers:

On the job of writing, and writing when your well of creativity has run dry:

On the word counts of their books, because I am curious about these sorts of things:

Thanks so much to these three lovely ladies for talking with us, and for Angela at the Edmondson Library for organizing the event. If you ever have the opportunity to see any of these fabulous authors in person, snatch it up! And go read their books — it’ll be time and money well spent!

LtR: Me, Kat, Sharon, C.J. Please ignore my hair. I don’t know what was going on there.