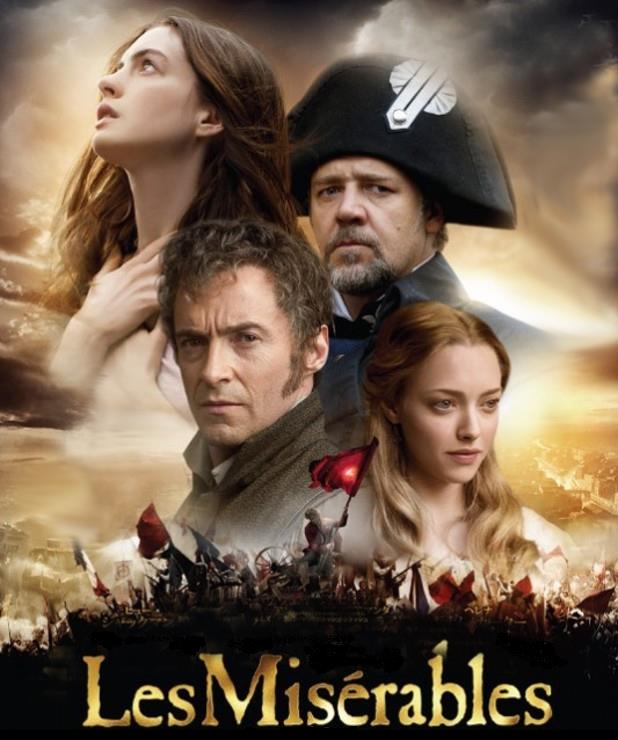 I think it’s safe to say that of all the movies released in 2012, Les Misérables was one of the ones I was most anticipating. This is for a few reasons:

2) It contains my favorite villain of all time

3) I love the musical, and have seen it (I think) five times on stage. I’m not entirely sure. I stopped counting after a bit.

4) The production value looked incredible, like it could finally convey the visual scope of the story along with the emotional scope.

After seeing it on Christmas day (and crying for a solid two hours), I came away with mixed feelings. Overall, loved it. I thought it was gorgeous, well-acted, and mostly well-sung. It hit all my emotional buttons, and was one of those movies I wanted to talk about (and did) for hours and days after.

But there were also some places where it fell short. And as a die-hard fan of the musical, I had a hard time just shrugging those things off. And disclaimer: I’m both a lifelong fan and a musician, so I may be drifting into “things no one cares about except me” territory. You’ve been warned.

First off, the casting for this film obviously, with a couple exceptions went in the direction of “well-known actors who can sing,” rather than “well-known singers who can act.”  In some cases, this was fine. Helena Bonham Carter and Sacha Baron Cohen may not have had the vocal range of their stage counterparts, but their characterization of the Thénardiers (who are pretty much the comic relief of the story, and not the vocal heavy lifters) was so spot-on that I overlooked their “singing.” Then there were surprises like Eddie Redmayne as Marius (I know that his head-shaking vibrato bothered some of my vocal-instructor friends, but I honestly didn’t notice it until someone pointed it out) or Anne Hathaway (who deserves all the awards. All. Of. Them. But more on that later). And Hugh Jackman, who did not have the vocal quality I expect for Valjean (“quality,” in this case, meaning timbre, not excellence), acted the part amazingly and sang it…well. His voice didn’t have the weight or the almost transcendent quality of Colm Wilkinson’s Valjean, but for those who have not had the music memorized for the past twenty years — which, let’s face it, is most of the movie-going audience, and I’m a bit of an anomaly — I don’t think this would be a disappointment.

But in a couple cases, I really, really wish they had gone with seasoned Broadway actors over A-list Hollywood. The main example is Russell Crowe as Javert. Don’t get me wrong, Russell Crowe is a fine actor, but he didn’t do anything acting-wise with the character that a stage actor couldn’t have done, and the singing was just not up to par with what the role requires. Here’s the thing with Javert. His character has this huge presence, both in the show and in Valjean’s life. He carries this tremendous weight of responsibility everywhere he goes, and his songs are meant to convey that. So it’s actually important to the character that he has a strong, solid baritone voice. Having to strain for the notes, or struggle for breath, weakens the character. It’s not just about how it sounds on the recording; I feel the character of Javert was done a disservice by having anyone less than a professional singer try to pull it off. Compare, for example, Russell Crowe singing “Stars” to Philip Quast (who many consider the definitive Javert) on the same song, and notice how much more gravity Quast’s version has. And as Javert is normally my favorite role in Les Mis, and has my favorite songs, having to hear Crowe sing out-of-breath and through his nose was…a disappointment.

And then there was Amanda Seyfried as Cosette, who had the look and the range, but not the support. I’m not sure if hers was a problem of casting, or just a casualty of the decision to film all the singing live. I think she would be highly benefited from a studio recording and some heavy filters. She also had kind of a Snow White vibrato, which can get grating after a bit. But this didn’t bother me as much, because honestly, Cosette isn’t anyone’s favorite character.

I loved Samantha Barks’ Eponine and Aaron Tveit’s Enjolras. These are both Broadway actors who were cast in principal supporting roles, and both were amazing. I thought they may have actually been holding back a bit so as not to stick out compared to the Hollywood actors, but any time either of them opened their mouths, I was transfixed. Enjolras is my second-favorite Les Mis character, and Tveit seriously broke my heart with his conviction. Actually, all the scenes with the students made me have ALL THE FEELINGS. Probably because the students were, again, cast with stage actors instead of movie actors.

Let’s talk for a moment about Anne Hathaway. She is the huge, glaring exception to the “they should have cast singers” feel I have about this. Because she was amazing. And really, she sang her songs beautifully. She’s on screen for maybe 15 minutes, but they were the 15 minutes that stole the film. She did Fantine’s signature song, “I Dreamed a Dream,” (which you may remember from the trailer) in one take, in extreme close-up, and it’s phenomenal. I’ve never seen anything like it on film, or stage, and she deserves every award she’s nominated for. Heck, they should dream up some new awards and give them to her, just so she can have more awards. She’s that good.

Okay, getting off casting, let’s talk about the production. It’s gorgeous, in the way that “gorgeous” can sometimes mean “disgusting.” I mean, Les Misérables is very appropriately titled. Most of the characters are, indeed, miserable. So there are some truly terrible settings: the shipyard where Valjean is incarcerated, the Thénardiers’ run-down inn, the docks teeming with bottom-dollar prostitutes, the sewers, the bloody barricade. So while some places, like the church where Valjean gets his second chance, or the garden where Cosette meets Marius, are objectively beautiful settings, most of the film is in a much grittier world. But the grit is so artistic and real that it’s also beautiful.

And as far as the emotion and the story-telling, Les Mis succeeded. Beyond succeeded. It really told this amazing story, spanning both cities and decades, wonderfully well. It broke my heart again and again and again (which is what I was expecting — this is not exactly a “pick-me-up” kind of show). I started crying at the first scene between Valjean and the Bishop (probably less than 15 minutes into the movie) and did not stop until the end.

They changed some things from the stage show. Some songs were cut entirely, nearly every song was truncated in some way and much of the transitional music was eliminated (it was done well, though, and unless you have the show memorized, you won’t notice). The order of a couple songs was changed around, and at the end, they eliminated a character from the final song (it works). But it all worked for the film, and the story, and even as a musical purist, I didn’t have any problems with it.

Overall, I’d highly recommend this movie to both lifelong fans of the story or musical, or those who are new to it. It’s amazing. Yes, you have to overlook some “meh” singing, but really that turns out to be a little thing in the overall scope of the film. If you’ve been on the fence about this one, go see it. You’ll be glad you did.