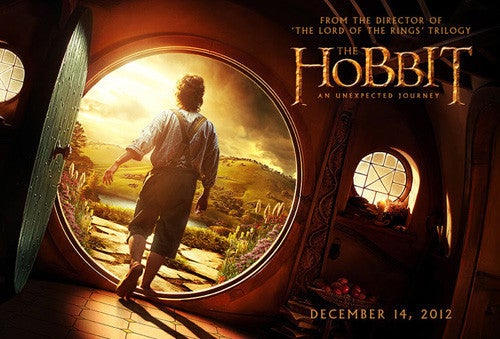 It probably comes as no surprise to you that I was super excited about the first installment in Peter Jackson’s Hobbit trilogy. I loved the Lord of the Rings trilogy and am a card-carrying member of the “I know each extended movie was four hours long, but I still wish there had been more” camp. Plus I love the book of The Hobbit, and am a huge fan of the original animated version. And also — Martin Freeman! Could there be a more perfect Bilbo Baggins?

So despite all the hubbub leading up to the release — Three movies! 48 frames per second! 3D! Elijah Wood returns! — I couldn’t wait to see it.

Now, one piece of controversy I can’t weigh in on is the 48fps 3D. We saw the plain ol’ 24fps 2D version. BUT The Husband went back a week later to see the 48fps 3D with his dad, and came back telling me it was life-changing and the single awesomest thing he’s ever seen in a theater. I asked him, “what about the people who say it makes it look like obvious sets and makeup and detracts from the magic of the world?” And his response was, “I have no idea what those people are talking about, but I feel sorry for them.” So I guess that’s our official family stance. If you disagree, you have to take it up with The Husband. Who won’t engage, so really, it’s probably best if you just rage silently.

Anyway, how about the movie itself? How does it stack up to LOTR, and how closely does it follow the book? And how did Jackson stretch an only moderate-length novel into three epic films? Is it a case of gratuitous money-grubbing?

Well, honestly, as a direct comparison, if I think back to how I felt the first time I saw Fellowship of the Ring and compare it to how I felt after The Hobbit: An Unexpected Journey, the honest truth is I liked Fellowship more. HOWEVER. That doesn’t mean I didn’t like The Hobbit. it just means the films are different — as they should be, because the stories have a vastly different feel, despite sharing a director and a fantasy world — and that I find the beginning of Frodo’s story a bit more compelling than the beginning of Bilbo’s.

But for what it is — an adaptation of the first third (ish) of J.R.R. Tolkien’s The Hobbit, I think it succeeds. The casting of the new characters — Bilbo in particular — was spot-on, and much like with the Lord of the Rings trilogy, believing the characters played a huge role in accepting the fantastic story. Freeman’s Bilbo, in particular, was fabulous. He completely embodied the homebody hobbit and made me root for him in spite of the fact that Bilbo (in a that often goes unnoticed) is not heroic. In the book in particular, Bilbo pretty much never voluntarily goes into battle or stands up for his companions unless it somehow serves his own self-interest. Now in the movie, this is changed a bit, and although it made me tilt my head and go, “huh, that wasn’t in the book,” I understand why film-Bilbo needed to evolve a bit more than book-Bilbo. Some things work on paper that just don’t translate to screen. But Freeman made these changes seem totally organic to the character Tolkien created, and I think they worked.

The returning cast members — most notably Ian McKellen’s Gandalf and Andy Serkis’ Gollum — easily slipped back into their old roles. Kudos to the makeup department, because they made me believe that Elijah Wood, Ian Holm, Cate Blanchett, Christopher Lee, and Hugo Weaving hadn’t aged at all. It helps that Elijah Wood hasn’t aged since he was about 15, but that’s beside the point. And they even made Ian McKellen look younger than he did 10 years ago. I tip my hat to them. That is no small task.

Aside from Freeman, the new cast members all performed admirably. The standouts was Richard Armitage as Thorin Oakenshield, the leader of the motley crew of dwarves that Gandalf assembles. This film fleshes out Thorin’s back story a lot more thoroughly than the book does (using supplemental materials written by Tolkien), and I found it really interesting to learn about why he was the way he was. We don’t get a very in-depth a look at all the dwarves, as the film decides to highlight just a handful of them. I imagine that different dwarves will be highlighted in different films, so that by the end, we’ll know a good amount about each of them. I don’t mind this approach, as it would be really hard to get a close look at all 13 dwarves and still have anything resembling a story in just one movie.

As for the differences from the book, there was actually very little in the way of actual change. Most of the elements in the film that aren’t found in The Hobbit are chinks of back story that Tolkien himself filled in in his other writings. So they’re not changes, or additions, to the story. They’re just parts of the story that give context to what’s happening, and tie it into what happens in LOTR, that people who have only read The Hobbit wouldn’t know about. In my opinion, that doesn’t make them gratuitous or indulgent. They’re part of the story. Have been for decades. They’re just not the first book. So I appreciated them. Now, there are a few legitimate changes to the story. As I mentioned before, Bilbo has a bit more of an arc. There’s some fighting in places where there isn’t fighting in the book. The order of a couple minor events is switched around. But there weren’t any changes that I felt hurt the story, or marred the integrity of what Tolkien wrote.

And this film is overall more lighthearted and — occasionally — silly than LOTR. It’s received some criticism for this, but honestly, The Hobbit is a much more lighthearted book than the Lord of the Rings trilogy. It’s got singing. It’s got something resembling slapstick humor. It makes bodily function jokes. If anything, the film toned most of this down from the book (for example, the goblins aren’t singing when they chase the dwarves into the trees. Good call, Jackson, as a song there may have diminished the intensity of that scene — but if the song had stayed in, at least he could say it’s in the book). So yes, the tone is different, which means it’s enjoyable in a different way. It’s still a spectacular fantasy adventure set in Middle Earth, but they come in all shapes and sizes. Kind of like dwarves.

Bottom line: I really enjoyed An Unexpected Journey. Was it the overwhelming awe I felt after Fellowship of the Ring? No, but that’s okay. I enjoyed the story and appreciate the way it was told. I loved the characters and look forward to getting to know them better. And I am still nothing but excited for future installments.

One thought on “Film Review: The Hobbit: An Unexpected Journey”