I just returned home from the 2015 SCBWI Midsouth Fall Conference, and whew. I am tired. Not only physically tired from days jam-packed with amazing panels and breakout sessions, followed by nights spent laughing with friends until we couldn’t hold our heads up or our eyes open. But also mentally tired from all the wisdom that was shared, and creatively tired from untangling the knots that had been littering my latest WIP.

I could sleep for a solid day, no problem.

But first, if you’re a writer, I’m going to tell you something important. Something that I’ve known for a while, but that attending this conference reinforced in an undeniable way. Are you listening? Good.

Whether you are a NYT Bestselling Author or a dreamer still plugging away at your first novel, community is vitally important. Maybe it doesn’t seem like that should be true — writing is most often a solitary pursuit, after all — but trust me on this. Without community, most of the authors I know would not be authors. Yes, even the naturally talented ones. Yes, even the ridiculously successful ones.

Without community, the voices of doubt can be deafening. Without community, rejection can be crippling. Without community, giving up may seem like not only the easy choice, but the obvious choice. The smart choice. Communities can be different things for different people. Whether you’re into pagan communities or seventh day adventist outposts, each of us need a group of people to rely on. People who offer support and strength in times of need, to give you the courage to chase your dreams.

I’m lucky. I know this. I live in a city that has one of the most vibrant and supportive writing communities in the country. Most of my best friends are writers, and several of them are successfully published and willing to double as mentors.

They’re also the people who cried with me when I got my diagnosis, who have made me dinner and taken my children to gymnastics. We have celebrated birthdays and marriages and holidays together, road tripped together, run races together, and moved more boxes from Old House to New House than I can count. We have had the same conversations so many times we can rant each other’s rants. 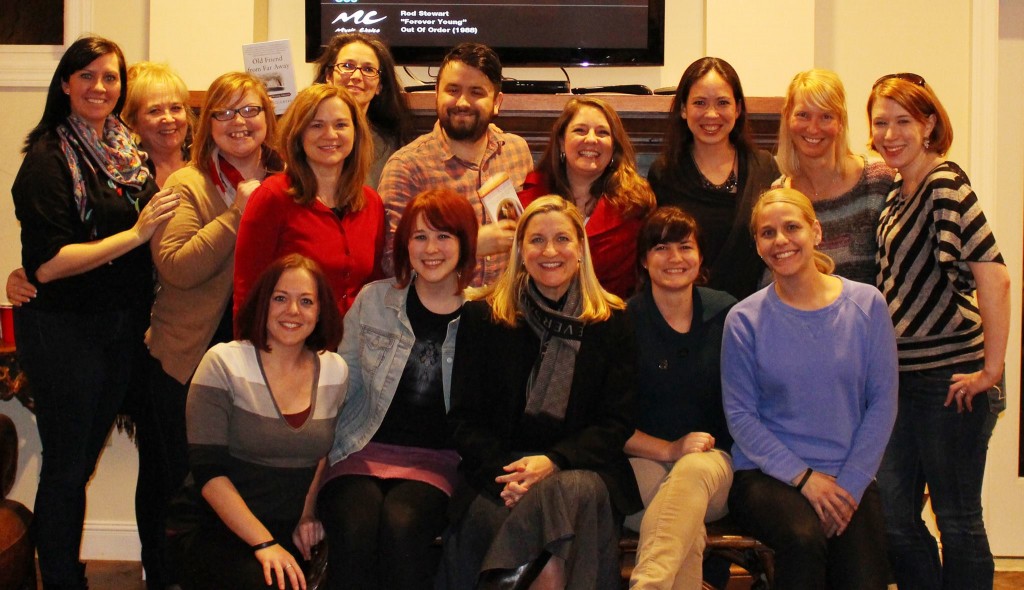 Right now, you’re probably doing one of two things. You’re nodding along knowingly, because you have a community, too, and you relate to everything I’ve just said.

Or you’re despairing, because you feel like an island, and have no idea how to change that.

To that I have two things to say. One, you’re not an island. I promise, there are those out there in the same stage you’re in, suffering from the same doubts and insecurities, working toward the same goals. Somewhere out there is a friend you can lean on, confide in, celebrate with. You just haven’t met them yet.

Two, you are capable of finding them. No matter how shy, how insecure, how introverted, how geographically isolated, how young or old, how experienced or raw. You can do this. It will involve stepping outside your comfort zone, doing something that scares you. But you can do this. I believe it with my whole heart.

Maybe you can muster enough strength for a Big Action, by joining an organization or going to a conference or a retreat or book launch and introducing yourself to strangers. I’ve done this, and trust me, I know it is terrifying. I’ve gone to book launches and hovered in the back, pretending to read the spines of the books on the shelves just so I wouldn’t look out of place. I’ve signed up for a retreat where I only knew one person, and felt the urge to run and hide in a corner with my laptop instead of talking to people. The fear can be paralyzing. But if you can push through it — even if it’s just to introduce yourself to one person, the least-scary-looking person at the event — maybe that’s all you need to do. Sometimes one person is all it takes.

And if that person doesn’t end up being Your Kind of People? Try again. And again and again. It’s daunting, but remember, a person is only a stranger once.

Maybe that’s just too much, and no amount of pep talks will make you physically walk into a place where you don’t know anyone. That’s totally fine. Maybe, for you, stepping outside your comfort zone involves becoming active in an online forum like Absolute Write, or following the #amwriting tag on Twitter and engaging in those conversations, or emailing another writer you know vaguely through social media and asking if they’d be interested in exchanging work.

That’s what I did. Three years ago, when I was considering writing a book and didn’t know any other writers, I emailed another blogger I’d interacted with on Twitter and asked if she’d ever considered writing, and if she’d be interested in having a critique partner. I have no idea what possessed me to do this — I am Introverted with a Capital I, and do not voluntarily reach out to strangers — but that tiny step turned out to be life-changing. Today, that blogger is not only still my primary critique partner, but also one of my best friends. Because of that email, I wrote a book, and then another and another. I found my local writing community. I discovered a sense of belonging I’d never felt before. 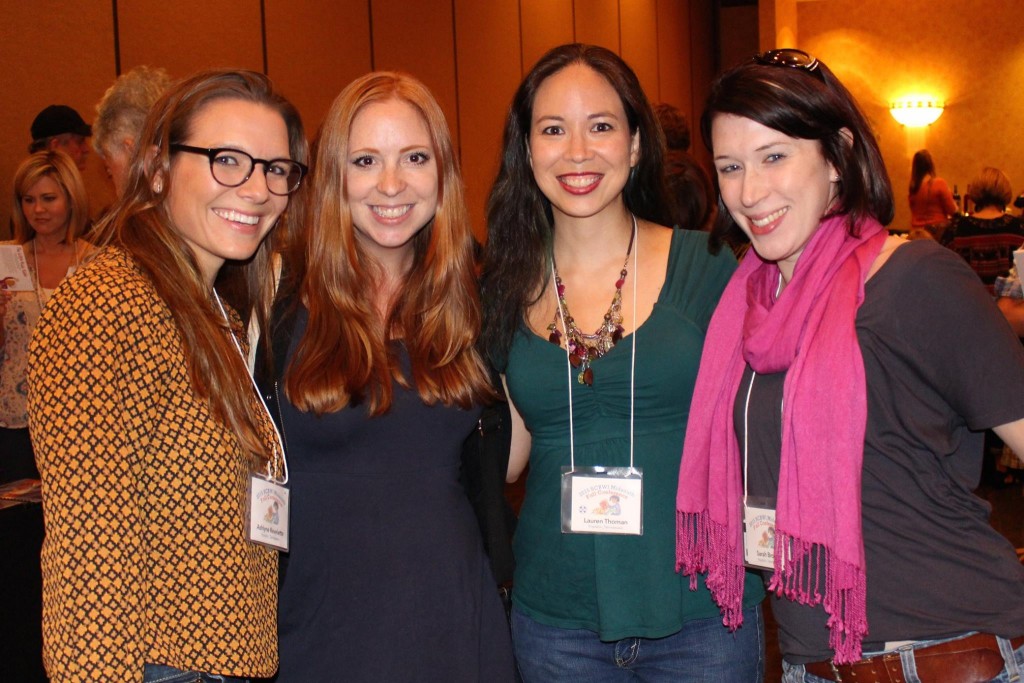 And before you say, well, you’re an anomaly, let me tell you, it happens more often than you think. At the SCBWI conference I attended this weekend, one of our keynotes was given by the writing team of Gail Nall and Jen Malone, who met online when they entered the same writing contest. Now they’ve published multiple books together. Since they live halfway across the country from each other, they’ve only met in person a few times, but that doesn’t make their friendship or their writing camaraderie any less true.

During their keynote, Jen asked all the published writers in the room to stand, then told them to sit if they thought they could’ve gotten to where they are without the support of other writers. Want to take a guess at how many sat down?

No one is surprised when I say zero, right?

At the same conference, a pair of men — obviously good friends — was introduced to me, and then the mutual friend doing the introduction said, “Guess how they met,” in a voice that told me I’d be surprised by the answer.

Yup, you guessed it. Twitter. It was only their first or second time meeting in person. Not that you’d ever know it to see them interact.

I hear stories like this all the time. Even in my own life, I have multiple good friends where our first interaction was online. Forget what Buzzfeed or HuffPo tells you — you can make friends and find community anywhere. It just takes some effort. 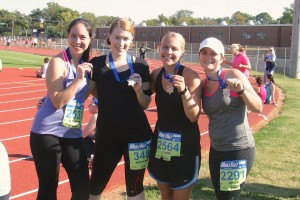 Bottom line is, wherever you are in your writing and your friendships, don’t discount the importance of finding other writers to commiserate with, to cheer on, to ask for feedback and wisdom, to celebrate in times of accomplishment and grieve with in times of disappointment (and not just yours — one of my favorite things about having talented writer friends is being able to celebrate their successes, even if I’ve just suffered a failure. It’s a much better mental place to be in when you can always find something to be happy about).

Not every writer I know has a critique group, or lots of local events to attend, or a love of social media. That’s fine. But every writer I know, published or pre-published, without exception, will tell you that they would not be able to keep making books without their writing community, whether it is vast or intimate, local or online, public or private.

Community comes in all shapes and sizes and locations. Yours doesn’t have to look like mine, or anyone else’s. It can be entirely unique to you and Your People. But please, don’t try to do this alone. Don’t let fear or pride make you an island. Find the people that give you the fortitude to keep walking this road. Putting words onto paper may be a solitary activity, but Writing — as a career, as a dream, as a life — is better with a team.