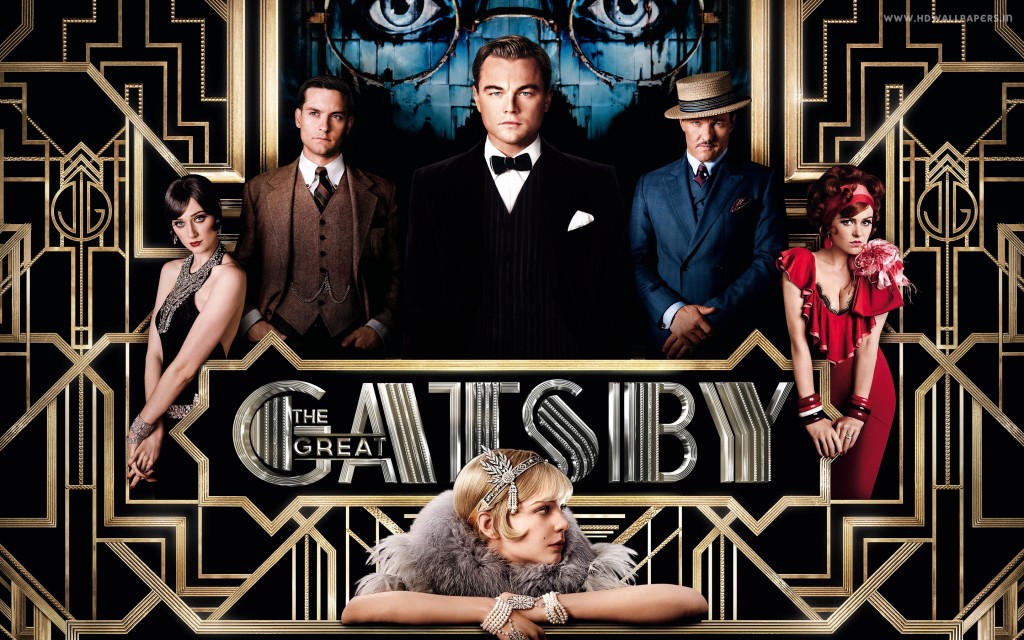 I have a confession to make, and some of you aren’t going to like it.

Wait, no. Those words are in the wrong order.

I really didn’t like the novel The Great Gatsby.

But I do not love this book.

So when I saw it was being made into a movie, I had mixed emotions. On the one hand, I was less than enthused at the prospect of revisiting this story I kind of hated. On the other, I adore Baz Luhrmann’s directorial style (Moulin Rouge is one of my favorite movies, ever ever ever), and the cast was phenomenal. So while buzz built and the bookish world worked themselves into a frenzy, I sat in the background quietly, figuring I would probably catch it on Blu-Ray, just so I could see if director + cast made up for my aforementioned story issues.

Besides, sometimes movies are expensive and I am poor. And if I chose to see Gatsby and that somehow meant I couldn’t see Iron Man 3 or Star Trek Into Darkness…well…

But, as it so happened, I was out for dinner with friends the night Gatsby premiered, and they asked if I wanted to go see Gatsby with them after dinner. I gave the reasons why I couldn’t — I had no money, I didn’t like the book, I hadn’t planned on seeing it…and they turned around and said it would be their treat, and they hadn’t read the book and therefore I was allowed to hate it, and wasn’t I just morbidly curious to see if I disliked the movie as much as the book?

Well, when you put it that way.

By the way, I have some fabulously awesome friends, who do things like offer to treat me to a movie I have warned them I may hate, just so we can spend more time hanging out. They make me a happy hobbit.

So, how did it measure up, given my feelings toward the source material, and my artistic feelings about the actual way the movie was made?

Let’s start with the positives. I still adore Baz Luhrmann’s style. I realize he is a very love-him-or-hate-him director, and that the way he tells stories can be a bit…

In a Baz Luhrmann movie, you’re going to get garish colors, anachronistic music, characters that are more caricatures, and some dizzying camera work. If you’ve seen Moulin Rouge, Romeo + Juliet, or even Strictly Ballroom, you probably know this. Gatsby is no different, and while I may not love the story, I do love the way the story was told. It’s not necessarily true to how the story is told in the book. It’s overly stylized and energized. But personally, I like that.

Then there’s the acting. Now brace yourself for a bit of a shock, but I have recently learned that there are people in the world who do not like Leonardo DiCaprio.

I know. Just let that sink in for a minute.

To be clear, I am not one of them. My feelings toward him are all positive. They have been since his Romeo + Juliet and Titanic days, and have only grown fonder since films like Inception and The Departed. And Gatsby was no exception. He did a great job portraying the titular obsessive billionaire, in turns charming and creepy. This probably won’t be the role that finally lands him his elusive Oscar, but for me, he was the character I enjoyed the most on the big screen.

I tend to have mixed feelings about Tobey Maguire in most of his roles. I feel like he tends to do a better job than I expect (so maybe I need to raise my expectations), but he’s pretty much never the actor I picture in my head when I think about a character (Ahem. Peter Parker, anyone?). Likewise, he was not who I imagined when I pictured Nick Carraway. But to be fair, I’ve never had a solid mental picture of Nick Carraway, because he is such a passive character (more on that in a bit). So no actor would have made me think, “YES. THAT IS EXACTLY RIGHT.” I think the best I could have hoped for from Nick Carraway is that I didn’t utterly despise him. And that’s…about what I got.

In other roles where I have seen Carey Mulligan (Doctor Who, Never Let Me Go), I have always found her to be lovely and sweet, but also sad. She carries it in her eyes, and even when she’s playing a generally happy character (like in Pride and Prejudice), it always seems to me that she’s got some sort of hidden melancholy that motivates her. This is actually perfect for Daisy Buchanan, who on the surface is a vapid and flippant trophy wife, but underneath is full of sadness and regret. My feelings about the character aside, I thought Mulligan’s portrayal of her was perfect.

The supporting cast — Joel Edgerton as Tom Buchanan, Isla Fisher as Myrtle, Elizabeth Debicki as Jordan Baker — all embodied their roles perfectly. For me, the acting was the other major highlight of this movie.

As far as an adaptation goes, Gatsby is close. There are changes, obviously. There are always changes, and I learned long ago that true book purists are never happy with film adaptations, because they always change something. I didn’t think the changes hurt the overall tone and message of the story. But there are others who disagree. Movie Nick Carraway is in a sanitarium after his encounters with Gatsby have concluded, whereas in the book, he is merely the narrator, and it is never implied that he became a morbid alcoholic afterward. And while all the big elements of the ending are the same, one thing is added that changes the tone of the scene. And of course there are other changes, scenes missing, subplots and subcommentary eliminated. But again, this didn’t bother me.

Now let’s get into my issues, which are not so much movie issues as book issues. And my opinion is unpopular, and I know that. I know the book is a commentary on the elusiveness of the American Dream, capitalism, idealism, truth, and love. It’s well-written. It’s intelligent. Cognitively, I know all these things.

But the reason I don’t like it is that even in satire and social commentary, I need characters I can root for. Or at the very least, a character. But Gatsby gives me none of this. All of the characters are despicable, and do despicable things. Gatsby is charismatic and charming, but also dishonest, deluded, and obsessive. Daisy is effervescent and empty, and ultimately abhorrently selfish. Nick is in turns passive and enabling to the point of utter frustration. I can’t get behind any of the main characters, and the supporting cast is, at the very best, only slightly better (and often times much worse).

It’s not that I can only like stories with likable characters and a fluffy plot — hopefully you know by now, that’s not it at all. But I need balance in a story. If the story is peppered with examples of humanity at its most vile, selfish, and shallow, I need at least a few moments of beauty and compassion and generosity to balance it.  And Gatsby has always been lacking in this area. It does it consciously, wrapping the ugliness of the characters’ souls in glittery packages, so that the reader can see the blackness under the beauty.

The movie actually attempts to soften the blow a bit. Gatsby wasn’t as destructively obsessive. Daisy wasn’t as harmfully selfish. Tom wasn’t as  loathsome and wicked. The characters are humanized just a bit — mostly through the charisma of the actors themselves — but it’s not enough to make me want to ever give them time out of my life again. I don’t want to spend time with these people. I don’t want to sympathize with them, and I don’t care when bad things happen to them. And if I’m going to read a book, or watch a movie, I want to care. I want to invest a part of myself in the story.

Gatsby has never given me an opportunity to do that. I knew this going in, and I was curious to see if the movie would change that. It did, to a certain extent. I liked it more than the book. But that’s like saying I like stuffed mushrooms a little more than sauteed mushrooms. Really, the problem there is I don’t like mushrooms. And although I love me some cheese and breading, the underlying problem that keeps me from enjoying it is that under the coating of things I enjoy, it still tastes like mushroom. And that’s my issue with Gatsby. It tastes like mushroom. Glittery mushroom.

Ultimately, I’m glad I saw The Great Gatsby. It confirmed that this simply isn’t my kind of story, and it never will be, no matter how lovely the writing, the colors, the costumes, the direction. I can enjoy the way the story was told, but I don’t enjoy the story. There are many who do, and I don’t begrudge them that at all. Enjoy art, in whatever form you prefer. If you believe Gatsby is the greatest novel ever written, or that the film adaptation is brilliant, more power to you. The beauty of art is that it’s subjective, and there will never be anything everyone universally agrees is great. There are people who despise Van Gogh, who loathe Harry Potter, who think Citizen Kane is a snooze-fest and Mozart was a hack.

And that is fine. Because I’m over here in the corner, stuck in my unpopular belief that Gatsby…is just not that great.

3 thoughts on “Film Review: The Great Gatsby (from someone who isn’t a fan of the book)”