Today is the official release for Shannon Dittemore‘s debut novel, Angel Eyes! It’s a beautiful and exciting tale of tragedy and romance, angels and demons. Isn’t it pretty? I was fortunate enough to receive an advance copy of Angel Eyes, and you can read my review here.

In celebration of the release of Angel Eyes, I am privileged to be able to treat you to an interview with Shannon, who has been super-kind and friendly. In it, I ask some questions about Angel Eyes, writing, and just some random trivia about Shannon, because trivia is fun. 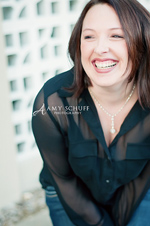 Where did you come up with the idea for Angel Eyes?

I’ve always loved biblical accounts of angels. There’s so much we don’t know and the topic is fodder for imagination. As a teenager, I was part of our church’s performing arts team. We traveled, did puppetry and mime. We danced and did skits. I’ve played Satan in nearly every medium I can name. Angels and demons have always been a part of my storytelling experience, so it was a very natural choice. The heartbeat of the story, though, arrived when I began contemplating the halo.

Brielle is a dancer and a photographer. Are you either of those?

I’m not. I dabbled in photography during high school, so the dark room at Stratus High resembles the dark room I learned in, but I didn’t pursue it after that. And the only dancing I did back in high school was to Carman songs with my church group, or in a cheerleading uniform at sporting events.

How did you come up with the names for your angelic and demonic characters?

I’m kind of instinctual here. Names either work for me or they don’t. One of my angels did get a name change after I read two different books with characters sharing his name, but the other angelic characters have remained the same since I drafted the story.

I never thought I’d read an origin story for the angelic halo! How much of the Celestial realm was Biblical research, and how much was pure imagination?

It’s mostly imagination, but my imagination was informed by scripture. As a theology student, one of the problems I’ve always had reading angel books is that I’m pulled out of the story constantly because I run into theological issues that don’t gel. Angel Eyes is absolutely fiction, but I did try not to blatantly contradict scripture.

I’m thinking Angel Eyes is a good fit for an older young adult audience. There are some intense themes presented, so if younger readers are interested, I’d recommend a parent reading first. And, while I’ve gotten great feedback from readers across the spectrum, I’m thinking the story will be best received by readers with a Christian background.

Without getting all spoiler-y, what can you tell us about the sequel to Angel Eyes?  Will we learn more about the history between Canaan and Damien?

Well! You will learn a lot more about many of my characters. How about that? At the end of Angel Eyes there are characters scattered across two realms. Some of them will return and some of them will not, but, yes, history will be revealed.

How long have you been writing?

Always, I suppose. As a kid, I wrote poetry and plays. I journalled. I didn’t get serious about novelling until late 2008. My daughter was a couple months old and a horrible sleeper. Angel Eyes was conceptualized as I walked the floor with her one night.

How long did it take to write Angel Eyes?

My first draft was done in four or five months, but it was rough. I wasn’t in a hurry and had two small children at home, so it took me another year of editing and getting feedback before the manuscript was ready for representation.

What are you most looking forward to after your book is released?

You know, I’m kind of in the trenches right now. I have several deadlines looming: line edits for Broken Wings, which is the name of book two, by the way, and I’m drafting book three. Release date or not, I don’t know that I’ll really breathe until after the first of the year. So, that, I suppose. Breathing. Resting.

What is one piece of advice you’d give an aspiring writer?

Settle in for the long haul. I wish I could say I came up with that on my own, but I didn’t. I read it somewhere and it’s never left me. It’s so very true. The waiting never stops. Even after you’ve acquired an agent and a publisher has acquired you, you’ll still be waiting for something. Learn to be okay with it.

How do you deal with writer’s block?

I walk. We live in a court and I literally walk in circles until I’ve thought through a problem. My kids sit on the steps and watch, the neighbors wave, but I have to keep moving. Have to keep thinking.

It was surreal. We knew a deal was possible, so for days I answered the phone all giddy and shrill. When it wasn’t Holly—my agent—I got downright moody. After nearly offending my husband, I decided I had to get my shrill under control. So, when Holly did call with the deal, I was very zen. I was in the kitchen, staring out the window at my humming bird feeder and I just kept thinking, “Holy heck. My dream publisher wants my book.” It took several days for it to set in.

What is your favorite Bible verse or passage?

That’s tough. I’m a huge fan of the book of Daniel. I also love Esther. LOVE Esther. Not surprisingly, I’m drawn to the books that read like stories, and one of my favorite verses comes from the Gospel of Matthew. Seek first the kingdom of God and His righteousness and all these things will be added unto you.—Matthew 6:33

It’s a tie. Disneyland and Hawaii. I’m rather excited about the Disney resort they’re putting on Oahu. Best of both worlds!

[NOTE FROM LAUREN: It’s official. I need to go to Hawaii.]

What song is stuck in your head right now?

I can show you the world. Shining, shimmering, splendid…. I’ve got a three year old.

[NOTE FROM LAUREN: I have this stuck in my head right now too. I also have a 3-year-old. Freaky.]

What’s the most recent movie you’ve seen in theaters?

The Avengers! Just the other night with my mom and sisters. Captain America was my favorite Avenger until Iron Man started talking. What is it about snarky bad boys?

What are you reading right now?

I’m actually reading several things, which is not common for me. I’m reading A Wrinkle in Time because the other day I realized I couldn’t remember half the story. I’m also reading a couple WIPs by two aspiring writer friends.

What’s your caffeinated beverage of choice?

Coffee or Pepsi. Or coffee.

Name 5 authors that have inspired you.

[NOTE FROM LAUREN: Yes, only five, because I am really, really mean.]

Okay, without thinking too hard, here are five fabulous writers who are so good they make me cry:

Thanks so much for being willing to answer my questions, Shannon! I wish you great success with Angel Eyes, and look forward to reading more about the adventures of Brielle and Jake!