I feel like I’ve been hearing about The Mortal Instruments series by Cassandra Clare nonstop since I started blogging. It comes up in every meme, every Top Ten list, every discussion post when people are discussing YA books or characters. And I’d never read it, because apparently I have been living in a hole all this time.

So finally, I decided to make some time for Book 1 in this series, City of Bones. I may not have time for the entire Mortal Instruments series (or the prequel series, The Infernal Devices) right now, but I could at least read the first book. I could meet the characters and become familiar with the world and the mythology. And maybe then I’d understand what all the hype is about.

City of Bones follows Clary Fray, only child of single mom Jocelyn Fray. Clary and her best friend Simon go to a club in New York City one night, and all is well, until Clary witnesses a murder. But not just any murder. First, the victim grew claws and attacked viciously. Second, the victim disappeared before her eyes. Third, no one could see the three murderers but Clary.

Thus, Clary discovers the world of the Shadowhunters, warriors dedicated to ridding the world of demons and monsters. No human is supposed to be able to see them, which makes what Clary witnessed even more peculiar. And while Clary vows to steer clear of the Shadowhunters, they are forced to join forces when Clary’s mother disappears and Clary is attacked by a demon.

Soon, Clary has joined forces with Jace, Isabelle and Alec; three teenage Shadowhunters determined to solve the mystery of Jocelyn’s disappearance, while answering some questions of their own.

I have this problem when it comes to highly hyped things. I tend to not like them. I get this vision in my head of MAGIC, and then when whatever it is fails to completely knock my socks off, I feel let down. It happens with movies, books, TV shows…you name it, I have been disappointed by the overhyping in it.

So I was a bit cautious heading into City of Bones. On the one hand, I like the premise a lot. Magic + city + all manner of beasties = GOOD.

On the other hand, everyone loves it, ergo I will hate it.

I did not hate it. As a matter of fact, I rather liked it.

I enjoyed Clary. She was spunky and resourceful and loyal. She had her moments of head-scratching stupidity, but they were infrequent. Overall, she had great development, she was likable, and I could understand why I was supposed to be rooting for her.

Of course, as with many books that have a protagonist discovering all manner of interesting things about their own mysterious past, I found myself scratching my head sometimes and wondering, “How did she not figure this out already?” But the book actually explains why she’s remained in the dark for so long, and it makes sense. There was one non-magic related development involving Clary that I saw coming from miles away, that she was completely oblivious to. It was kind of frustrating. But only kind of.

As for the other characters, my favorite is Simon. I know, I know, it’s supposed to be Jace. Everyone’s favorite character is Jace. But mine is Simon. He’s hilarious, he’s smart, he’s incredibly loyal, and he keeps trying to do the right thing even when no one has tried to do the right thing by him. Simon, you rock. I know you’re the underdog and will probably get the short end of the stick in this series, but I’m rooting for you.

Alec, Isabelle and Jace are also well-developed characters. They each have their own distinct personalities, they each grow throughout the course of the book, and I came to feel like I knew, liked, and mostly understood each of them.

Although I have a little issue, and that is that if you name two of your characters Alec and Isabelle, I’m going to picture them like this, no matter how they’re described in the book, and regardless of the fact that they’re brother and sister: 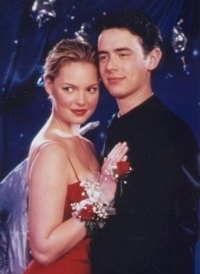 So. That was an interesting little hurdle for me.

Then there’s the matter of the story and the mythology. I thought Cassandra Clare did a great job of weaving together basically every fairy tale/paranormal story we’ve ever heard. Vampires, werewolves, demons, angels, fairies, elves, witches, monsters – they all make an appearance here, but it doesn’t feel like you’re just being pummeled with bedtime stories. I loved the creativity in constructing the world, and how the fantasy world was integrated into our own.

And the story was great. A solid villain, a few mysteries to solve, some surprise discoveries, and a lot of action. I can see why so many people love this series so much, and I’m excited to see where it goes from here.

No, I’m not ready to add it to my list of “favorites” yet, but there’s still four books left in this series, plus two prequels. So who knows, maybe it’ll get there one day. Part of the problem is that unlike most readers, I wasn’t all that enamored with Jace, and he’s one of the cornerstone characters of the book. I understood why he was the way he was, and his snark was amusing, but he just kind of got on my nerves. Too guarded, too untrusting. Yes, he had good cause, but it didn’t make him a character I loved. At least not yet.

And I still have a lot of questions, which was definitely intentional on Cassandra Clare’s part. You’re not supposed to walk away from City of Bones with all the answers. It sets up a series, and it does it well. But as a result, I didn’t feel very satisfied when I finished this book. I prefer my “first” books — even when there are many sequels to come — to still leave me satisfied, with more answers than questions. And while I felt this book was highly enjoyable, I wasn’t satisfied.

I will definitely get to the rest of the books in the series — City of Ashes is next. It’s a great premise and a fascinating world with likable characters, and I thought City of Bones was a good start. And now I can officially (at least in part) understand what the hype is all about.

5 thoughts on “Review: City of Bones by Cassandra Clare”