Today is my 9th wedding anniversary. The hubs and I met in college, and got married when we were barely more than teenagers. We’ve been through re-locations, career changes, new pets, new kids, and just all sorts of the abundant craziness you’d imagine would take place when you’ve been married for nine years. 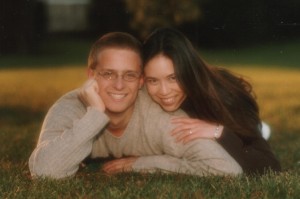 This was one of our engagement pictures. So young. So innocent.

But as I have a book blog, and a mostly YA book blog at that, I’m not going to get all sappy right now just because it’s my anniversary. I don’t run a sappy blog, people.

So instead, I’m going to take a different route.

You know the YA Crush Tourney going on right now? My Twitter is all abuzz with bloggers and readers nominating their favorite YA heroes and love interests to “compete” for prestige and virtual bragging rights, which they will never use because they are all fictional, but which are still fun.

Well, I got to thinking about it, and I thought to myself, “Dude, [because I call myself “Dude” in my head] my husband is totally YA Crush-worthy, if he was a fictional character. And still a teenager.”

Because seriously, my husband is nearly 30, and considering most YA heroines are in the 15-17 age bracket, that’s not going to work. Plus, he’s taken, ladies.

But when I met him, he was 18. We started dating when he was 19 (notice I’m not saying how old I was, because I am older and I like to try to forget that little tidbit of information). And I think that if I was a fictional female protagonist, I would want my husband (whom I will henceforth refer to as “G”) to be the love of my life, the apple of my eye, the cream in my coffee. (Bonus points if you can name the movie that quote came from). So for the purposes of this post, let’s just assume I’m talking about the 19-year-old version of G.

Writers, feel free to be inspired in the writing of your male protagonists.

Why My Husband Would Make an Excellent YA Hero

1. He’s pretty darn cute. And as we all know, heroes must be easy on the eyes. Otherwise, the heroine’s heart can’t go all aflutter.

Okay, funny story. Once upon a time, I was chatting to G on the phone. He was using his Bluetooth earpiece, and happened to walk into a convenience store. And we paused our conversation so that he could pay for his purchases, and through the phone, I could hear the distinctive sounds of giggly teenage flirting.

Yes. The convenience store cashier was hitting on my husband. And he was being very polite and proper, but she wasn’t getting the hint.

“Is she hitting on you?” I hissed into the phone. “Yes, sorry,“ he whispered back under his breath. “Don’t be sorry, this is  hilarious,” I responded. And proceeded to eavesdrop on the rest of their really awkward conversation until G finished paying for whatever he was buying. Probably a hot dog and a Mountain Dew, because that’s what he buys at convenience stores.

Poor girl. She was coming on pretty strong too.

Waitresses have also been known to hit on him pretty regularly. When I’m sitting right there. It’s kind of baffling, yet strangely amusing. For me. G finds it embarrassing.

I wonder if it will happen while we’re out celebrating our anniversary.

2. He has martial arts training. You want your hero to have some sort of training for when you are attacked by the forces of darkness.

When he was 18 and 19, his skills were still pretty fresh. There was one time in college where a group of his friends thought he was joking when he said he could beat them all in a fight. And as we stood outside the music building, he told them, “Attack me.” And being college boys, they did.

I don’t remember how many of them there were. Three or four probably. I do remember that they ran at him, and in a matter of seconds, he had them in a heap on the ground. They all were panting and rather bewildered as he stood above them, barely out of breath. Granted, these were our friends and fellow music majors — hardly the forces of darkness — but it was still rather impressive.

Also, we have weapons in our bedroom. There’s some scary looking knife/sword things, and a set of tonfas. And once upon a time, he knew how to use them.

3. He is clear-headed in a crisis situation. This seems to be a staple with YA heroes. They always seem to know exactly what to do when the world is ending and the heroine is FREAKING OUT. Because not all heroines can be Katniss and Hermione. Some are like me and are completely useless in crisis situations.

On our first date, we went to a movie. When we came out of the theater, we discovered my car had been broken into. The window was gone and some valuables had been stolen. My gut reaction was to drive back to my dorm and crawl into bed and hope that when I woke up, somehow the robbery would magically be reversed. G was the one who called the police and filed the report, then drove home while I huddled in a miserable ball in the passenger side, because it was late October and I was freezing and the car had no window.

4. He has  a deep sense of honor. Which, let’s face it, is a must for a hero. They always seem to be made of stronger moral fiber than everyone else.

5. He is easy to talk to. Now, I realize not all heroes are outgoing and personable, but lots of them are. Just look at Peeta!

G is like that. He’ll enter a roomful of strangers and just start chatting someone up. Many of our friends were made because G would just invite people over to our house, thus forcing me into contact with other humans. Otherwise, I’d never meet anyone or do anything, and I’d be miserable and lonely, but wouldn’t know what to do about it because I’m colossally introverted.

I knew G was different when we would talk for hours on the phone every night while we were “just friends.” I abhor phones. I will do everything in my power to avoid them. I won’t even call family members for things like birthdays unless G makes me. I hate phones THAT MUCH. But I would call and talk to G every night.

6. He is loyal and persistent. Sometimes the hero and heroine have to surmount some serious obstacles before they can be together (Again, look at Peeta). So you need the leading man to be committed to his cause, and his lady.

G asked me out every other week for months before I finally broke down and said yes. We were good friends, but I didn’t want to “spoil the relationship,” and it “wasn’t a good time for me.” But he persevered, and obviously that worked out well for both of us.

7. He’s witty and sarcastic. And let’s be honest, the best male protagonists are the sarcastic ones.

I don’t have a quote to give you as an example, because I don’t write down all of G’s memorable quotes the same way I do with my kids. Because who does that?

8. He understands technology and wiring and tools and stuff. Some of this knowledge and understanding will probably come in handy when we are faced with the apocalypse/alien invasion/demon realms and have to fight back/hide out/build a spaceship/seek refuge in the wilderness.

9. He learns ridiculously fast. Surely adaptability and quick assimilation of new knowledge is an asset when saving the world.

As I’ve mentioned before, G is a web developer. What I didn’t mention was that he is completely self-taught, using books from the library and Internet research. After some hard-core self-education that spanned about a year, he was able to land a fabulous and legit web developer job at a fantastic company. He tends to downplay how awesome that is, but I won’t. It’s awesome. And he continues to learn, all the time. For fun. I don’t get it.

10. We were very nearly insta-love. It wasn’t true insta-love, as we were friends first (hence the aforementioned persistent whittling away at my defenses), but once we started dating, things moved really fast. We went from dating to engaged in four months. G was 19. Looking back on it, it’s a wonder our parents didn’t all have heart attacks. But as soon as we got involved, we knew. This was it.

And now, here we are. Nine years of marriage later. We made two small humans. We changed careers several times. We moved to Tennessee, then to the East Coast, then back to Tennessee. And we love each other more each day. 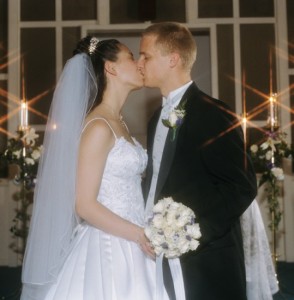 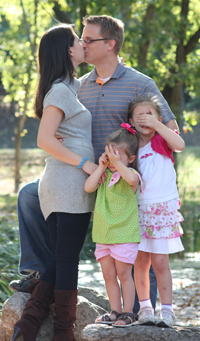 Happy Anniversary, honey! I love you oodles, and hope I didn’t embarrass you too much.

19 thoughts on “Why My Husband Would Be an Awesome YA Hero (a.k.a. Happy Anniversary to Us!)”