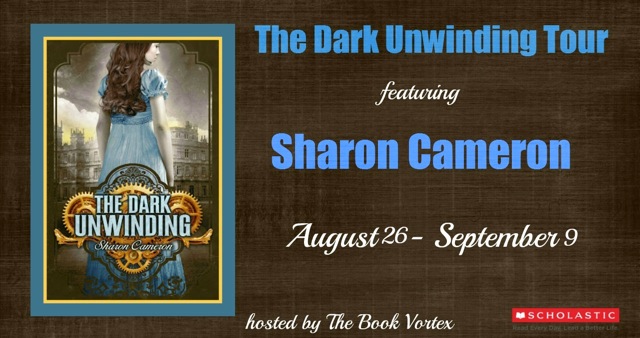 I’m excited to be participating in the blog tour, hosted by The Book Vortex, to help launch debut author Sharon Cameron’s new book, The Dark Unwinding! Sharon is a lovely person who I had the pleasure to meet earlier this week at her launch party. Sadly, she was the only person I “knew” at the party, and she was — understandably — completely swamped with adoring fans, so I wound up wallflowering it up in the YA section most of the evening. (Fortunately, I spotted Kat Zhang — who I hadn’t met before, but who is also a lovely person — doing pretty much the same thing, so we wallflowered together.)

But in my few precious moments with Sharon, she ingratiated herself to me permanently by being the only other person I have ever met (who is not related to me) to have seen and loved the movie Raising Arizona. We are now BFFs.

So today, I am excited to bring you an interview with Sharon! I kind of got carried away with my questions and sent her quadruple the amount I was supposed to. Oops. But she was, again, awesome and picked her favorites to answer. I think her answers are pretty spiffy, myself.

Oh, and at the end, there’s a chance to win pretty and shiny swag!

1) How long did it take to write The Dark Unwinding?

From first word to sale to final copy edits, almost three years. To get my first completed
draft, about thirteen months.

2) Is The Dark Unwinding the first novel you’ve written? And if not, what was the first
one about?

Oh, my beloved first novel! It’s about a young man’s sacrifice and impossible choice
when his adopted Scottish clan commits treason against the King of England in 1745. I
hope to shake the dust off it someday!

3) Avoiding spoilers (so you can be really vague if you need to be), what is your
favorite scene in The Dark Unwinding?

I have such a soft spot for the scene where Katharine spends the afternoon sliding down
the hill. It’s a glimpse at everything she would want from her life, and yet believes she
will never have. It was also one of the most difficult scenes to write, probably because I
loved it so much!

4) What’s the best piece of writing advice you’ve ever received?

This came from my agent, Kelly Sonnack, at Andrea Brown Literary. She told me that
whenever she suggested a change in my manuscript, that instead of thinking about the
exact change she suggested, I should focus on why she felt there needed to be a change
in the first place. By focusing on “what” was making a reader feel a certain way, rather
than “how” I was being asked to revise, I think I’ve been able to get to the heart of
the problem during the revision process, rather than focusing on specific changes that
weren’t resonating with me. It made me much more perceptive as a writer.

Moriarty in Sherlock Holmes (especially in the new BBC Sherlock television series, SO
awesome!)
Gollum in Lord of the Rings (poor Gollum!)
The Winter in The Long Winter by Laura Ingalls Wilder
Snape in Harry Potter and the Prisoner of Azkaban
Mrs. Danvers in Rebecca by Daphne DuMaurier

7) Top 5 favorite heroes (same as above)

Out of the Easy by Ruta Sepetys

9) Most recent movie, TV show or book that made you cry.

Oh, gee. The unfortunate truth is, they all do. Happy or sad. It’s humiliating, really.

THCW: I pressed her on Twitter for a REAL answer to this one, and turns out it was a Publix commercial. I feel ya, Sharon. Those things are brutal. Seriously.

10) Reality show you’d have the best chance of winning.

The Amazing Race. I am positive I would rock that and win a million bucks.

The West Highlands of Scotland. THE most beautiful place on the planet and where I feel
incredibly at home.

Thanks so much for joining me on my blog today, Sharon! I’m so happy I could be part of your tour, and I wish you and The Dark Unwinding oodles of success!

Sharon Cameron was awarded the 2009 Sue Alexander Most Promising New Work Award by the Society of Children’s Book Writers and Illustrators for her debut novel, The Dark Unwinding. When not writing Sharon can be found thumbing dusty tomes, shooting her longbow, or indulging in her lifelong search for secret passages.

More about The Dark Unwinding:

The Dark Unwinding begins when seventeen year old Katharine Tulman is sent to her uncle’s remote and bizarre estate to have him committed to an asylum. But instead of a lunatic, she finds a child-like, genius inventor with his own set of rules, employing a village of nine hundred people rescued from the workhouses of London. Katharine is torn between protecting her own inheritance and preserving her uncle’s peculiar world that she has come to care for deeply, a choice made even more complicated by a gray-eyed apprentice, and the strange visions and nightmares that have her secretly fearing for her own sanity.

Find Sharon on the Interwebs:

Visit the other stops on the Blog Tour!

And now for some fun swag! Sharon is going to send 10 lucky winners a beautiful ribbon bookmark, perfectly tailored to match your copy of The Dark Unwinding. There’s a key at one end and a metal disk with the title and gears at the other, tied with either a satin or organdy ribbon in light blue (to match the cover model’s dress, of course).

I used my copy of the book to model the bookmark for you. But don’t get excited. It’s my book. You can get your own. 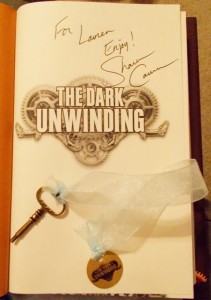 The ribbon is light blue. I swear. 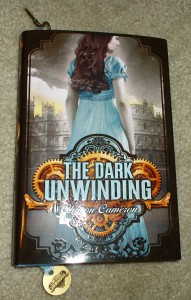 It fits the book perfectly! You know you want one.