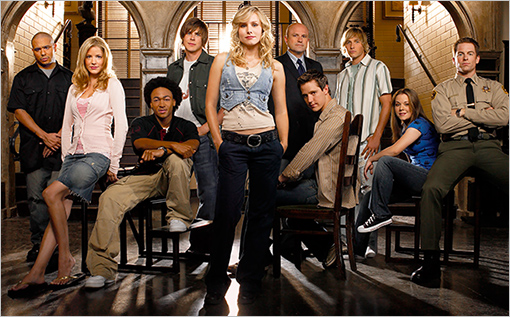 In honor of the Veronica Mars Movie Kickstarter campaign, which completely took over my Twitter feed and my brain this morning, I thought I’d talk today about why I love Veronica Mars so much, and why I think it’s fabulous brainfood for writers.

I first discovered Veronica Mars after the series had ended. When it was airing, I had thought it looked like a silly, shallow high school show. OH THE REGRET.

Fortunately, while I was one of the reasons the show didn’t have a big enough audience to be renewed past a third season, the silver lining is that I could binge-watch the entire series on Netflix. I marathoned while at my parents’ house, watching “just one more episode” over and over while my kids chased each other around like crazed squirrels hyped up on sugar.

So why do I think this show is a must-watch for writers? Basically, it has everything. Relentless pacing. Layered characters. Plotting so tight you can bounce a quarter off it. Just the right amount of foreshadowing. Smart writing full of wit, charm, and emotion.

Yes, it’s a show about teens (although Veronica’s dad, Keith Mars, is one of my absolute favorite TV parents ever), and yes, it’s a show about crimes, but it’s so much more than either of those things. Even if you’re not into teen shows or noir, Veronica Mars has something for you. It has heart. It has sass. It has kissing and explosions and red herrings and one-liners.

Oh, and it’s Joss Whedon’s favorite show. If that means anything to you (which it should).

Granted, I think Season 1 is the best example of fabulousity, but even in the less-stellar second and third seasons, Veronica Mars could still serve up the spit-take laughs, the jaw-dropping twists, and the sucker-punch tearjerkers better than most other shows on TV.

If you’re a writer, or just a person who enjoys clever writing and a good whodunit, clear your schedule for Veronica Mars. You can even stream it online at The WB.

And I’m serious. You’ll need to clear your schedule. It’s that good.

Still on the fence? Here’s a fan-made trailer to convince you.