I found out this weekend that in about two weeks, a trio of authors will be doing a book signing in Nashville (I live right outside of Nashville), and that a bunch of book bloggers will be attending. I’m really excited to attend. Not only will this be my first signing and therefore my first opportunity to meet some of my fellow bloggers in person (which, I have to admit, kind of terrifies me. I’m only extroverted on the Internet. In real life, I tend to want to hide behind things and be socially awkward), but I actually really enjoy the authors.

The three authors are Amy Plum, Myra McEntire, and C.J. Redwine. So leading up to the event, I will be posting reviews for Hourglass, Timepiece, Die for Me, and (hopefully) Defiance and Until I Die. Still working on getting my hands on those last two, although I have high hopes for Defiance. I’ve been in communication with The C.J. Redwine herself, and awesomeness is in the works. Stay tuned.

I will also post other things in the coming two weeks. No fears. I may also post a review of The Wise Man’s Fear or a really old book that I just feel like reviewing. Maybe a Farseer book, since I keep referencing them as The Awesomest Ever. Maybe The Princess Bride, because it is mortifying to me that so many people don’t realize it’s a book. Maybe something else. I don’t know. I’m flighty. We’ll see. But there will be other stuff.

Hourglass is the story of Emerson Cole, just a typical 17-year-old girl, with the pesky exception that she sees dead people. [Side note: Is the character’s name, Emerson Cole, after Haley Joel Osment’s character of Cole in The Sixth Sense? Questions for Ms. McEntire when I see her!]

Ever since her parents died in a tragic accident, Emerson has been going through life, minding her own business, when all of a sudden someone from the past will show up. A Scarlett O’Hara look-alike. A poodle-skirt-clad group of teenagers from the 1950s. An century-old baseball team. Only Emerson can see them, and if she tries to touch them, they pop like bubbles.

Under the care of her brother Thomas, Emerson has been to every form of therapist, ranging from Freudian men with glasses to bone-shaking witch doctors. No one has been able to help her.

Until one day, Thomas hires Michael, a mysterious young man representing a company called the Hourglass. Michael is certain he can help Emerson; but even more intriguingly, he believes she can help him.

Soon Emerson is introduced to a world she never knew existed. A world where normal people can have extraordinary powers. A world where time travel is possible. And a world where she is more powerful than she ever dreamed.

I love me a good time travel story, and this had all the trappings of a great one. I liked Emerson. In spite of her 17-year-old-girl-ness (a plague among YA heroines, considering they are inevitably 17-year-old girls), she was likable. She was obviously attractive yet a bit insecure, but not one of those narrators who’s constantly lamenting her ugliness while every guy around her proceeds to walk into telephone poles as they are stunned by her beauty. She had a quick wit and dry sense of humor that I enjoyed. She actually used her brain a good chunk of the time (not all the time, but I dare you to name a main protagonist who always makes well-informed and fully considered decisions).

I also liked the sci-fi elements of the story. I liked the premise and the structure. I liked that a “scientific” explanation was given for how all their crazy abilities worked individually, and how they worked in tandem. And of course, a major sticking point for me is always if the “rules” of the world made sense. In this case, I think they did.

We drifted a bit into X-Men territory for a little while, but I forgive Ms. McEntire for those small similarities. I kind of think X-Men has such a large scope that it’s kind of hard not to call it to mind when writing anything about people with powers. Also, like with almost any time-travel book, there were scenes reminiscent of other time-travel stories (the one that came instantly to my mind was Back to the Future II). But again, it’s hard to have a time-travel story without talk of paradoxes and the space-time continuum. There was no mention of flux capacitors, so I’m good.

The love story between Emerson and Michael was a bit heavy-handed at parts. It was obvious that was where the story was headed from the first moment they laid eyes on each other. But I honestly mean it was only a bit heavy-handed, and only in parts. She talked about his superhuman gorgeousness a little too often for my liking (although it was probably toned down for what an actual teenage girl would have been thinking). Her descriptions of her reactions around him were occasionally a tad over the top. But overall, I enjoyed their chemistry and their interaction.

I will also give Emerson credit for not turning into a complete pile of mush, a la Bella Swan, every time he was around. He may be super-pretty and she may have a tummy full of butterflies, but at least she still spoke her mind and stuck to her guns. She even got annoyed with him on occasion. That was refreshing. 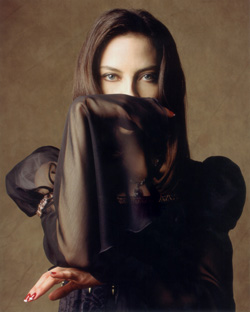 Buffy is hard-wired into my brain. It’s a sickness.

The secondary characters were mostly well-developed. I loved Thomas and his wife Dru, although throughout the entire book, I kept picturing Dru like this:

Emerson’s quintessential gorgeous BFF Lily was also fun. She wasn’t ridiculous and annoying like gorgeous BFFs so often are in YA lit. She was actually loyal and funny and I could understand why she and Emerson were friends. Plus, her character had some intriguing twists that I hope and expect to see developed in the sequel(s).

Michael also had a likable best friend, which is something I find a little rare in these types of books. Normally the male love interest either has no friends or his best friend is a jerk. But I really enjoyed Kaleb. He was charming and interesting, and the more I found out about him, the more intrigued I became.

I guess that’s a good thing, since Timepiece is all about Kaleb.

Another bonus: for once, there was a twist at the end that took me completely by surprise. I am very rarely taken by surprise in a YA book, and when I am, I even more rarely feel that the book really earned the ending. Sometimes I feel like a twist ending is dropped in simply for the sake of a twist, with nothing else in the book backing it up. It feels forced and awkward. This one I totally didn’t see coming, but it also didn’t feel random just for the sake of having a twist.

Anyway, this review has gone on long enough. Bottom line: I really enjoyed this book. It was a fun, exciting read that put its own spin on the special powers/time travel theme.

Content Guide: Contains descriptions of past violence, and teens being amorous.