Timepiece is the sequel to Hourglass, which is awesome and crazy and a wee bit over-the-top but not so much that I can’t love it anyway.

Whereas Hourglass is told from the point-of-view of reluctant time-traveler Emerson Cole, Timepiece‘s narrator is her boyfriend’s best friend, the dark and brooding Kaleb.

[Spoilers from Hourglass ahead. Skip down to My Thoughts if you haven’t finished it yet. Then GO FINISH IT.]

Timepiece picks up shortly after the conclusion of Hourglass. Emerson and Michael have been reunited, much to Kaleb’s dismay. They have succeeded in their mission to rescue Kaleb’s father, Liam, the director of the Hourglass. The devious Jack Landers is still on the loose, and no one has any idea what his endgame is.

Additionally, Kaleb and the other young members of the Hourglass are starting to be able to see rips, something that only Emerson and Michael could do before. And the rips are getting bigger.

No sooner have we digested this information than a new, mysterious baddie shows up and hands Kaleb an ultimatum in no uncertain terms: Deliver Jack Landers, or life as he and his friends know it is over.

Soon Kaleb, Emerson, Michael and the entire Hourglass crew — complete with some new recruits — are searching for Jack, using every trick in their arsenal, both technological and supernatural. But Jack always seems two steps ahead. And time is running out.

Timepiece starts with a bang. New, bigger bad guys are immediately introduced and the stakes are promptly upped. We were introduced to the basic mechanics of this time-slippy world in Hourglass; this time we get into details. We find out more about most of the secondary characters. The action increases significantly.

Bottom line: If you thought Hourglass was fun, Timepiece is going to blow your socks off.

I’ve got to admit, I was a little tentative at first about the switch to Kaleb’s point of view. I felt like I had developed a good relationship with Emerson in the first book, and I was comfortable viewing the world through her eyes. Plus, the Kaleb we meet in Hourglass, and at the beginning of Timepiece, is a crass, womanizing drunk. Charming, sure, but I spent a good portion of the first few chapters wanting to smack him upside the head.

[Also, as a side note, add some tattoos and piercings, and I was totally picturing Kaleb like this: 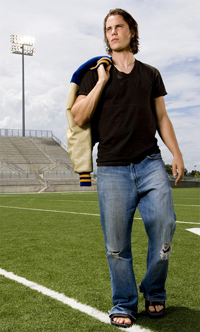 I know, Kaleb’s not a football player and probably doesn’t go around telling anyone “Texas forever,” but his personality screamed Tim Riggins to me. Anyone else?]

Okay, sorry, just had to throw that out there.

Luckily, while I can’t say that I wound up agreeing with all of Kaleb’s choices, I was able to understand him, sympathize with him, and really like him. Even when he was being a womanizing drunk. He was a great narrator, and it was really interesting viewing this crazy world through his eyes.

It was also fun to see Emerson and Michael from someone else’s point of view. In Hourglass, their relationship is all fluttery feelings and absurd chemistry and sparks of electricity. In Timepiece, we can see how that gets a little annoying to the people around them.

We get to know the secondary characters better, especially Emerson’s best friend Lily, which made me super happy. I was really hoping we’d find out more about her, since I really enjoyed her character in Hourglass. There’s still a few characters I would like to know more about. Maybe the third book will use one of them as narrator?

Jack Landers is a great villain. He’s evil and scary and dark, but not cartoonish. He’s given a solid back story, so that you understand him but still don’t like him. He’s smart and cunning and not given to extensive monologuing or pointless vendettas. You can really understand why he would be two steps ahead of our group of heroes, without making him ridiculous or them stupid.

As far as the story in Timepiece, I was riveted from the first chapter through the last page. There is a ton of action in this book. The stakes are higher, the powers more developed, the craziness heightened. Like Hourglass, it had a few twists that I absolutely did not see coming, yet none of them felt contrived.

There is a love story in Timepiece, but it is not a love triangle, thank goodness. I was scared, going in, that I was going to have to put up with Kaleb and Michael being all angsty and territorial about Emerson throughout the book (as Kaleb obviously has feelings for Emerson in Hourglass), but that fortunately did not happen. As it was, I really like the way the romantic angle was handled. It felt real. It wasn’t all sparks and sighs and fluttery feelings, which is nice, because I don’t think that’s the way romance normally happens.

Overall, Timepiece was a fun and exciting story. I really enjoyed the characters and was never quite sure what was going to happen next. The book ends with an obvious setup for a third book, but while I am itching to read more about the world of the Hourglass (which will probably be a while, since Timepiece hasn’t even been officially released yet), I still felt completely satisfied at the conclusion.

Note: I received Timepiece as a digital review copy from NetGalley. Timepiece will be released on June 12, 2012. You can pre-order yours on Amazon now!