The more I participate in weekly memes, the more I’ve come to a disturbing realization. Try to prepare yourselves, for the shock and horror may be great:

Not everyone has read The Princess Bride.

Are you still with me? How’s your heart? Try to focus on your breathing. I know, the truth is hard to digest.

There is even a large portion of the population that does not realize that The Princess Bride was originally a book. They’ve seen the movie, and think it’s the original. 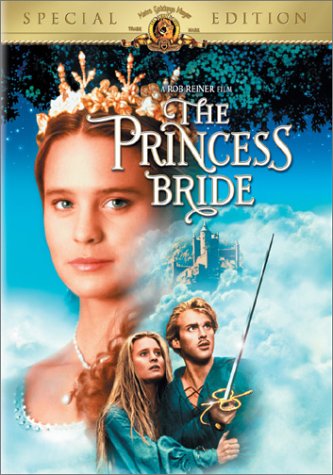 Don’t get me wrong. The movie is fabulous. Fabulous. But it’s not the original, and it’s certainly not as good as the book.

This review isn’t going to be a usual review. I’ll give you a nutshell intro to the plot (like you need it), then list the reasons why you need to read this book right now.

Probably most of you know the basics of the story. Buttercup, the most beautiful girl in the world, falls in love with Westley, a worker on her family’s farm. Although they are deeply in love, Westley decides to sail to America to seek his fortune, and while at sea, his ship is attacked by the Dread Pirate Roberts, who never leaves a prisoner alive.

Buttercup’s mourning is cut short when the dastardly Prince Humperdinck decides to take a bride. He chooses Buttercup because of her astounding beauty, but she vows to never love him. He doesn’t really care, because his true purpose is to have her killed by mercenaries, hoping to incite his fictional country of Florin to go to war with the fictional country of Guilder.

Buttercup is kidnapped by mercenaries, Vizzini (a Sicilian), Fezzik (a Turk), and Inigo Montoya (a Spaniard). They are then perused and methodically defeated by a mysterious Man in Black, who steals Buttercup away from them.

You know what happens next.

Why You Need to Read The Princess Bride Immediately

(all quotes taken from the 1992 paperback version, copyright William Goldman):

Here’s the blurb from the inside cover of my copy:

“As a boy, William Goldman claims, he loved to hear his father read the ‘S. Morgenstern classic, The Princess Bride.’ But as a grown-up he discovered that the boring parts were left out of good old Dad’s recitation, and only the ‘good parts’ reached his ears.

In short, it’s about everything.”

But of course, there never was any S. Morgenstern. There never was an “original” version of The Princess Bride that turned out to be more a history of Florin and Guilder than a story about True Love and Revenge. But the fact that Goldman writes it as if he’s extracting “the good parts” out of a boring history book just adds to the wit and charm of this book. He always inserts little notes in italics to let the reader know when he has “extracted” something. For example, at the beginning of Chapter 2, we have this note from Goldman:

“This is my first major excision. Chapter One, The Bride, is almost in its entirety about the bride. Chapter Two, The Groom, only picks up Prince Humperdinck in the last few pages.

This chapter is where my son Jason stopped reading, and there is simply no way of blaming him. For what Morgenstern has done is open this chapter with sixty-six pages of Florinese history. More accurately, it is the history of the Florinese crown.

Dreary? Not to be believed.”

He also interjects little pieces of “history” into the narrative so that we can orient ourselves:

“‘I’m going to America. To seek my fortune.’ (This was just after America but long after fortunes.)”

“‘I love you,’ Buttercup said. ‘I know this must come as something of a surprise to you, since all I’ve ever done is scorn you and degrade you and taunt you, but I have loved you for several hours now, and every second, more. I thought an hour ago that I loved you more than any woman has ever loved a man, but a half hour after that I knew that what I felt before was nothing compared to what I felt then. But ten minutes after that, I understood that my previous love was a puddle compared to the high seas before a storm. Your eyes are like that, did you know? Well they are. How many minutes ago was I? Twenty? Had I brought my feelings up to then? It doesn’t matter.’ Buttercup still could not look at him. The sun was rising behind her now; she could feel the heat on her back, and it gave her courage. ‘I love you so much more now than twenty minutes ago that there cannot be comparison. I love you so much more now than when you opened your hovel door, there cannot be comparison. There is no room in my body for anything but you. My arms love you, my ears adore you, my knees shake with blind affection. My mind begs you to ask it something so it can obey. Do you want me to follow you for the rest of your days? I will do that. Do you want me to crawl? I will crawl. I will be quiet for you or sing for you, or if you are hungry, let me bring you food, or if you have thirst and nothing will quench it but Arabian wine, I will go to Araby, even though it is across the world, and bring a bottle back for your lunch. Anything there is that I can do for you, I will do for you; anything there is that I cannot do, I will learn to do. I know I cannot compete with the Countess in skills or wisdom or appeal, and I saw the way she looked at you. And I saw the way you looked at her. But remember, please, that she is old and has other interests, while I am seventeen and for me there is only you. Dearest Westley–I’ve never called you that before, have I?–Westley, Westley, Westley, Westley, Westley,–darling Westley, adored Westley, sweet perfect Westley, whisper that I have a chance to win your love.’ And with that, she dared the bravest thing she’d ever done; she looked right into his eyes.”

The way the characters talk is simultaneously cheesy, poetic, endearing, and absurd. It’s hard to not feel a profound sense of happiness when reading a conversation taking place in The Princess Bride.

The characters in the movie are wonderful and iconic. The book lets us know how they became that way. As an example, I present to you:

Inigo Montoya. He is the greatest swordsman that ever lived. He gives Westley a stirring 30-second speech about why he is a great swordsman, and why he is hunting The Six-Fingered Man. He has one of the most iconic lines in the movie: “Hello. My name is Inigo Montoya. You killed my father. Prepare to die.” He is awesome.

Book Inigo is just as awesome, but now we are treated to 16 pages of intriguing backstory about him and his father, their relationship, his father’s murder, his training to become the greatest swordsman who ever lived, and his constant search for The Six-Fingered Man.

“Domingo Montoya was funny-looking and crotchety and impatient and absent-minded and never smiled.

Inigo loved him. Totally. Don’t ask why. There really wasn’t any one reason you could put your finger on. Oh, probably Domingo loved him back, but love is many things, none of them logical.”

And of course, he also says his famous line in the book. Many times.

The film is full of swordfighting fun, and the book has even more. Plus, the book goes into even more detail about the different fencing techniques, which doesn’t sound interesting, but is. Remember the part in the movie where Inigo and The Man in Black are bantering while swordfighting about the different attacks and defenses they are using? Straight from the book, but the book has even more of that. 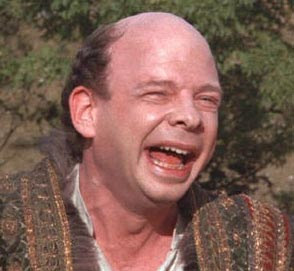 I know you’ve probably picked up on this by now, but the book is hilarious. It’s not side-splitting give-you-the-hiccups kind of hilarious, although an unexpected guffaw will probably escape your lips several times while reading this. But it is leave-a-smile-plastered-across-your-face-constantly hilarious. It will give you happy feelings.

I know this is hard to believe, but book Westley is about 10x awesomer than movie Westley. True story.

I know that super-strong, independent, quick-thinking heroines are all the rage these days. Buttercup is not like that. Poor girl, she’s not the sharpest tool in the shed.

“‘Do you love me, Westley? Is that it?’
He couldn’t believe it. ‘Do I love you? My God, if your love were a grain of sand, mine would be a universe of beaches. If your love were—‘
‘I don’t understand the first one yet,’ Buttercup interrupted. She was starting to get very excited now. ‘Let me get this straight. Are you saying my love is the size of a grain of sand and yours is this other thing? Images just confuse me so—is this universal business of yours bigger than my sand? Help me, Westley. I have the feeling we’re on the verge of something just terribly important.’”

She has beauty, and she has love, and that’s really all she has going for her. But it’s enough. She never learns to be a fighter, she never gets much cleverer or wittier, and she can’t wield a sword or shoot an arrow. But she has love, and it makes her strong.

And last but not least, the book contains this line:

And if by some cruel twist of fate you haven’t seen the movie either, I highly recommend it. It’s a beautiful and fabulous movie.

But you still need to read the book.

22 thoughts on “Review: The Princess Bride by William Goldman, and why you should read it. Immediately.”