Welcome to another Top Ten Tuesday, hosted by the people over at The Broke and the Bookish! After last week’s Super Heavy topic (which, granted, didn’t have to be Super Heavy, but it was for me), I’m glad this week’s is a bit lighter.

On a related note, I realized this week that I’ve been blogging almost six months now! This calls for some sort of celebration, or at least a dessert item of some kind. Preferably of the tiramisu variety.

And in that short/long time (depending on your perspective), I’ve met some truly amazing people. So many, actually, that I had a hard time with this week’s topic, simply because I’ve already met so many of the amazing bookish people who would have been on this list six months ago. They include Myra McEntire, C.J. Redwine, Amy Plum, Sharon Cameron, Kat Zhang, Ruta Sepetys (seriously people, Nashville rocks so hard), and a whole bunch of fabulous Tennessee bloggers. If you ever have a chance to meet any of these ladies (even if you haven’t read their books yet — which, confession time, I haven’t read all of them yet), I’d highly recommend it.

Some of these I stand a decent chance of encountering someday. Others fall solidly in the “one day if all my dreams come true and are sprinkled in fairy dust” category. You can decide for yourself which is which.

These are numbered so I can keep track of how many I have, but are in no particular order.

1. J.K. Rowling – You know she’s got to be on everyone’s list, because who wouldn’t want to meet the woman who created Harry Potter?

In related news, I dreamed last night that I was Harry, and Voldemort had agreed to have a nice little diplomatic chat with me, but halfway through our chat he figured out the twist ending. Guys, it is never good when the bad guy figures out the twist ending. I was really glad to wake up.

2. Suzanne Collins – In the same vein, I want to meet the woman who created The Hunger Games and singlehandedly brought about this crazy dystopian wave that we’re still surfing. And I would also like to thank her for creating Peeta, who may be my favorite YA male character ever. Or at least one of my top 3.

3. Lauren Oliver – She wrote Before I Fall and the Delirium series, and her writing is just so pretty. I just want to wallow in it.

4. Robin Hobb – No big deal, only the author of my favorite fantasy series of all time. I compare all other fantasy (and books in general, really) to this series, and while some are really, really good, her books stand superior.

A week or so ago, I opened my mailbox to find an autographed copy of the first book in the series, courtesy of Sarah, who had picked one up for me at Dragon*Con. I may have screeched right there at the mailbox.

5. Jessica Khoury – Her debut, Origin, just came out and I haven’t read it yet. I have an ARC (that I won in one of her contests, actually), sitting on my shelves begging to be read, but my life lately has not been conducive to reading. Hopefully I will remedy this soon. But she runs the best, most creative contests ever, PLUS she loves Robin Hobb’s books, and therefore I have decided we must meet someday.

6. Jodi Meadows – Her critique partners are Myra McEntire and C.J. Redwine. Considering how much I adore their books, I figure that loving Jodi’s books is pretty much a guarantee. And although I regret to admit that I’ve had Incarnate sitting unread on my shelf for months now (although sometimes I just have to gaze at the pretty cover), I know when I finally do sit down to read it, I’ll be in for a treat. Plus, I’m rather addicted to Jodi’s blog. And she is the one who introduced me to Lindsey Stirling videos. So I think we’d get along.

7. Veronica Roth – While Divergent was not my favorite book ever (although Insurgent was better), I love Veronica’s blog. I’ve spent so much time browsing her archives. She is responsible for a large percentage of my knowledge of the publishing industry (I’m not sure how vast that knowledge is — probably not very — but what there is, she planted). I would love to hear her speak and pick her brain.

8. Tahereh Mafi – Another author whose books I haven’t read yet (confession: I’m waiting until I can get them with the new cover, because I’m not a fan of the original Shatter Me cover), but her Twitter makes me laugh more than any other author. And anyone who can make me laugh that much is someone I want to meet.

9. Lori at Pure Imagination – She’s the only one of the Tennessee bloggers I regularly communicate with that I haven’t met yet. (Which is funny, because she was actually the first Tennessee blogger I started talking to when I started blogging). Thus far our interaction has consisted entirely of Twitter and blog comments. This needs to be remedied.

10. Sarah at Breaking the Binding – Sometimes you “meet” a person (and I put “meet” in quotes because as of yet, we have not actually met) and you just have to shake your fist at the sky and say “WHY WERE WE NOT RAISED TOGETHER FROM INFANCY?” And such is the case with Sarah. It is sad that we live in two different states, because if we were in the same town, I’m pretty sure great things would happen. Based on the sheer volume of cyber-communication that currently passes between us on a daily basis (a large percentage of which is geeky Tumblr links), I think we’d have no shortage of things to discuss.

Honorable Mentions (since limiting it to 10 is just…no):

Welcome to the Feature and Follow Hop, hosted by Parajunkee’s View and Alison Can Read!

This week is a little different than usual, because this is the 100th week of Feature & Follow! Huzzah! So to celebrate, the rules have been changed up a bit. First, all the participants will be doing our own features, picking a blog that we want to highlight. 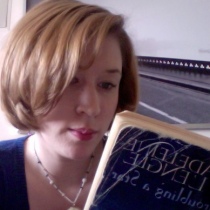 I’m featuring Sarah at Breaking the Binding, because she is awesome and we’re pretty sure we would be best friends if we ever actually met.

Sarah is new to the Feature & Follow, so she wasn’t entirely sure what she was getting into when she agreed to be featured. I decided to ask her the typical F&F questions, so that you can all get to know her a bit!

1. When did you start blogging?

I started blogging in late 2010 (but I think I lost the posts prior to starting my WordPress blog in January 2011). I was finishing up my Children’s and Young Adult lit class for my Masters degree and I had been driving my boyfriend and roommates crazy rambling on about all of the books I was reading. So, after a while of rambling to my boyfriends rather deaf ears, I decided to start a blog as a way to share my thoughts with people who may actually care! I think that boyfriend was rather relieved, as he was not a fan of fiction and didn’t really care to listen to me go on and on about the characters and the authors I adored.

2. What is your favorite part of book blogging?

My favorite part is simply sharing my thoughts, reactions, and emotions from the books that I read. I mean, it’s so incredible to know that there are people out there who are interested to know why I think Neville Longbottom is the true hero of Harry Potter or why I’m confused by all of the Instalove in YA. Even more so to know that have their own opinions to share on the same topic and it starts a discussion or debate! It’s also so great to know I’m not the only adult who gets lost in a YA novel and wants to gush about how fantastic the characters are.

Oh there are so many that it’s so hard to choose! So here are the top few that come to mind when I think of children’s or YA books. The Hero and the Crown by Robin McKinley has long been one of my favorite fantasy novels, I’ve read it so many times that I’ve lost count. The Harry Potter series is definitely up there as well and I’ve long been a fan of the Little House on the Prairie series. If there’s on book that defines my childhood that’s it.

4. What has been the best thing that has happened to you because of book blogging?

Honestly, I think the best thing has come from Armchair BEA! For the first year and a half of my blogging life I’ve been kinda hovering on the fringes and haven’t really gotten too involved. But participating in this event this really pushed me to meet more bloggers and become more active with commenting on the blogs that I do read regularly. Hopefully these connections will continue on beyond this week and ‘ll have made some new blogging buddies to keep in touch with!

So everyone wave hi to Sarah! Be sure to go check out her blog and let her know you’re following.

And last but not least, what’s a birthday without presents?

So this week is a giveaway hop! All of the feature host blogs will also be hosting giveaways. And mine is two SIGNED bookmarks from Amy Plum, author of Die For Me and Until I Die. One winner will win BOTH bookmarks, which will come in handy if you find yourself reading more than one book at once, like I always end up doing.

Just fill out the Rafflecopter below! Since this is the Feature & Follow, you will be required to follow my blog and Breaking the Binding to enter this giveaway.

Both bookmarks are signed, although for some reason I only flipped one over to show you. I’m a bit of a flake.

Giveaway will run through June 13. U.S. only. 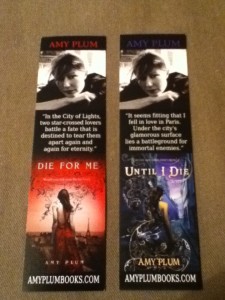 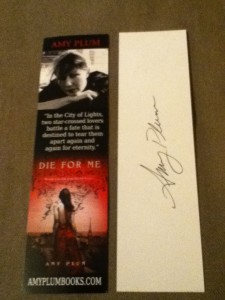