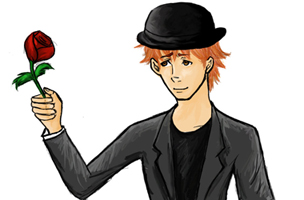 Lauren Oliver is quickly climbing my list of “authors I trust.” She may not have many books under her belt yet (she is also the author of Delirium and Pandemonium – read my review of the latter here), but I love what I’ve read so far. She has an amazing talent for writing characters in such a way that I feel like I know them and understand them – even if I don’t agree with them. She tackles subject matter I wouldn’t normally be interested in, and makes me care.

Such is the case in her debut novel, Before I Fall.

That is, until the night she dies in a fiery wreck.

What follows is a week of Sam reliving (and sometimes re-dying) that same fateful Friday over and over again.

She goes through it the way I imagine most of us would. First she denies what is happening to her. Tries to pretend it was all a dream or a hallucination. But it quickly becomes clear that what she’s going through is very real. And once she figures that out, she struggles with how to move forward.

Should she approach each day with a carefree, “eat, drink, and be merry, for tomorrow I’ll be dead” attitude? Should she try to right her past wrongs? Should she attempt to change the future?

As Sam goes through each day, her eyes are slowly opened to the realities of her life and the lives around her, and the truth behind her death.

I’ll get it out of the way early: Before I Fall is Mean Girls meets Groundhog Day. Sam’s story is equal parts Cady Heron (post-Plastification) and Phil Connors (although she probably resembles Lindsay Lohan a bit more than Bill Murray).

But you know what? I love Mean Girls and Groundhog Day. And I loved Before I Fall. So who cares? A good story is a good story.

So, that said, what’s the fun in reading a book about a Mean Girl that lives the same horrible day over and over, and dies after most of them?

As I said before: Lauren Oliver has an amazing talent.

I’m guessing that unless you really are Regina George, you will hate Sam at the start of the novel. She’s shallow, she’s rude, she’s selfish, and she’s mean. She justifies all her actions to herself, but she’s not in any way likable. I spent most of the first few chapters wanting to shake some sense into her vapid, empty head.

However, the more I read, the more invested I was in Sam and her journey. She grew. She transformed. Sometimes I wished she would snap out of her Plastics mentality faster, but Ms. Oliver wrote her arc very naturally and organically. And even when I didn’t agree with her decisions, I understood them.

Yes, there were parts where it dragged slightly (the fact that those parts are few and far between is still a monumental achievement in a book that recounts the same day seven times). And while I found myself ultimately liking Sam and cheering her on, there were a few other characters that made me gag every time they entered the scene (Sam’s BFF, Lindsay, and hunky boyfriend, Rob, are two prime examples). I understand their necessity to the story, but man, were they ever annoying.

The biggest problem I had with the book was that even after Sam realizes the error of her ways, she never calls out her friends (especially Lindsay) on their incessant bullying of…well, just about everyone. On the one hand, I can see how Sam is still intimidated by Lindsay and afraid of upsetting her. On the other…I kind of just wanted her to grow a spine.

However, those annoyances were completely overshadowed by my investment in Sam’s story; my complete adoration of the character of Kent, the sensitive, socially awkward boy who’s had a crush on Sam ever since elementary school; and my fascination with the character of Juliet, a reclusive girl who Sam, Lindsay & Co. have been tormenting for years.

Before I Fall ended before I was ready, but it ended where it needed to end. The story was resolved the way it should be (and no, I’m not going to tell you if she lives or dies. You’ll have to find that out for yourself).

I found myself thinking about Sam and her story long after I put the book down. Her story is haunting, sweet, heartbreaking, and inspiring. I loved it.